In fractal economies’ “afterward after words,” Derek Beaulieu makes the case for concrete poetics founded not upon immediate, trans-linguistic legibility (like Eugen Gomringer’s), but rather on utter materiality that voids signification. The poems in this collection, he explains, provide “documentation of the waste and excess produced through non-prescribed use of business machines.” Beaulieu posits these illegible, gritty waste products as interventions into sleek mid-century concrete poetry, which has slid into advertising (as evinced in graphic designer Ji Lee’s recent Word As Image, in which vispo meets logo). His poems operate outside the information economy, using photocopy degeneration, three-hole punching, stencils, Letraset, and the shredder to construct content-less work. Beaulieu thus rejects Moore’s “business documents and school-books,” which, according to his “libidinal economy,” are embroiled in a hegemonic capitalist system that co-opts language for its own ends. Yet even his poems, he writes, only intervene momentarily into that structure because doing so re-establishes the norm of narrative and meaning he wants to subvert. These poems are parries that thrust at legibility even as they dodge meaning. Yet despite their purported illegibility, the poems invite a kind of reading through their inclusion of titles and letters (or fragments thereof). A key to Beaulieu’s poetics lies in the poem “text/er,” from the book’s third section: “depression”: 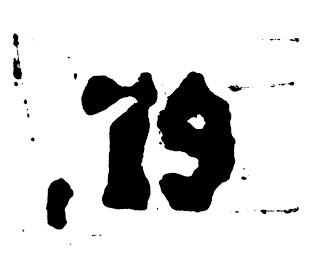 The title of course puns on “texter,” in common parlance one who sends texts. We also have “texture,” the visual qualities of an object (from text’s etymology in weaving), but also its essence (hence the title’s spooneristic play on urtext). The slash provides a pause, as if the work were embarrassed to declare itself a text (er…). Whoever the intended recipient, a texter couldn’t possibly text her this message, which consists of apparently degraded (textured) and slightly smudged black letter type: the lowercase “er,” reversed. An error? One would more likely see such type on a letterpress, inked and awaiting paper to make a legible proof, than in a modern office.

The included comma behaves like a slash, a pause indicated more to come. However, because it appears at the head of the line it reminds one that commas serve as decimal markers in many countries, turning letters into numerals: ,79. In this inky and oversized type, Beaulieu’s verse resists the capitalist structure that has co-opted language in favor of the numbers that underlie its acts. In fact, we must see that his business tools are out-of-date, if not yet obsolete, and thus mark an evasion of the dominant digital economy. The tactile transfer letters and stenciling remind us of the presence of other digits—the human hand—in creating this work, an intriguing contrast to its seeming impersonality. I quote “summer skies”: 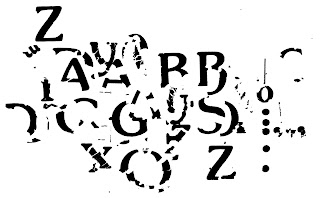 In blurring the boundary between text and image, these poems connect to Beaulieu’s subsequent, more overtly conceptual Flatland and Local Color, both of which treat source texts (Edwin Abbott’s Flatland and Paul Auster’s Ghosts, respectively) as data to be visualized. All three evade signification in favor of visualization, but fractal economies’ waste aesthetic opposes those works, in part because visualization helps us to “read” data. In fractal economies, the visual does not stand in for information, which seems to me even more daring in the face of the current vogue for beautiful data. What meaning the reader forms is largely eccentric, and entirely unnecessary to enjoy this visually complex and intriguing work.

Amaranth Borsuk is the author of Handiwork (Slope Editions, 2012), selected by Paul Hoover for the 2011 Slope Editions Book Prize; Tonal Saw (The Song Cave, 2010), a chapbook; and, with programmer Brad Bouse, Between Page and Screen (Siglio Press, 2012), a book of augmented-reality poems. Her intermedia project Abra, a hybrid book-performance collaboration with Kate Durbin and Ian Hatcher, recently received an Expanded Artists’ Books grant from the Center for Book and Paper Arts at Columbia College Chicago and will be issued as an artist’s book and iPad app in fall of 2013. She has a Ph.D. in Literature and Creative Writing from the University of Southern California and recently served as Mellon Postdoctoral Fellow in the Humanities at MIT, where she taught classes in digital, visual, and material poetics. She currently teaches in the MFA in Creative Writing and Poetics at the University of Washington, Bothell.