CLARITY AND OTHER POEMS by THOMAS FINK

I am much too late in drawing attention to this very important and masterfully-crafted book, Thomas Fink’s clarity and other poems, which was published in 2008.  But “reviewing” its poems five years later can serve to illustrate how great poems, even when rooted in their times, can provide pleasure and be relevant for a long time and possibly forever.

In clarity and other poems, Fink demolishes much of the factors that have made “headline” synonymous with “bad news. ”  We’re talking about irresponsible globalism, greedy politicians and businessmen, psychological dysfunctions—actually, let me just cite one of his past blurbers, Carol Stone, who says it aptly when she says “Thomas Fink’s poems expose a dangerous post-modern world where lying in politics, family life and commerce is omnipresent.”

But Fink does his exposures with wit, verve, and an adept mastery of poetic tools that allow him to evolve such forms as the sonnet, hay(na)ku and sestina, among others. And it’s just as well that Fink deploys his poetic tools so well as critique alone does not suffice to create poetry. Here’s an example I offer by just opening the book at random (when I open a poetry book at random and the offered poem is fabulous, that attests to the general quality—in this case, fabulous—of the collection). I am offered the poem “Frontal and” and here’s an excerpt:

…When you obscure the mutter,
I know who you are….

Obviously, “mutter” puns off of “matter.”  But when we think of the mutter, isn’t it true that often what’s muttered is sincerely what the mutterer believes?  The mutterer just may reduce the volume of said mutter because of nervousness or fear over its reception—but what was muttered was still what the mutterer sincerely feels.  Fink’s eye is clear—this poem(‘s excerpt) being an example of the “clarity” referenced in the book’s title.

Indeed, the excerpt goes on to say

Rapt calculation about
a starter cave, or about a reprobate driving an
ugly probate through a crowded field of
relatives…

The skillful sculpting out of “probate” from “reprobate” of course raises the matter of litigation.  We may not know the specific legal suit at hand, but what’s clearly implied is the notion of someone(s) taking advantage of others—hardly an irrelevant issue in our times, whether in (as Stone notes) “politics, family life and commerce.”

I am also intrigued by the phrase “starter cave.”  It raises in my mind the notion of “starter wives”—first wives who are later traded by their husbands for (presumably a more preferred) “trophy wives.”  The notion of “starter cave”—which I read to mean one’s first house—implies there will be larger houses (castles!) in the future.  Combining this implication with the fact that men who traffic in trophy wives are often associated with wealthy businessmen offers the question—how do today’s men get to be wealthy and privileged?  While not applicable across the board, the terms “Wall Street,”  “Hedge funds,” “CEOs (who often make multiple times their workers)” et al come to mind.  But hasn’t the federal government subsidy of “banks too big to fail” put a lie to the notion of fairness?  Put a lie to the notion that one will be rewarded by one’s hard work and talent versus one’s networks?  When “network” includes the biases granted by social class, inheritance,  higher education (afforded by or whose entry to are determined not merely by qualifications), et al, clearly the field isn’t level!

All that, and I haven’t even deconstructed (so to speak) the entire poem!  But that’s one of the marvels and challenges of Fink’s poems—they are quite dense.  That is, there is much to excavate and such excavation usually rewards one’s reading.  Here’s another example from just the beginning of the book’s first poem, “Pyramid Assembled.”  I cite this example, too, because—like many other poems—it is a concrete or visual poem.  So with my Iphone, here it is (and please forgive my first generation Iphone’s camera quality--you can click on image to enlarge): 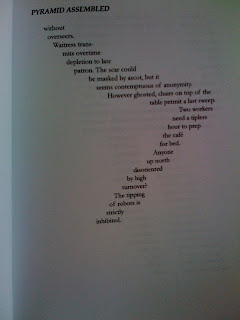 And by making us recall workers and “overseers,” Fink brings us back to the present—the abuses of the present that include the “tipless / hour to prep / the café”.  We know that the tip is important to a waitress’ compensation.  So a “tipless / hour” is significant in adversely affecting a worker who already makes far less than a hedge fund manager.  And this phrase also makes me remember a story I just read of Amazon.com workers protesting the unpaid time they must put in when checking out of the warehouse.  That is, workers leaving Amazon.com’s warehouses apparently are checked to make sure they’re not leaving with some of Amazon.com’s inventory – but it often takes a long time to get checked out such that workers could be in line for half an hour—an unpaid half an hour—every workday before they are able to leave their jobs.  Seems pretty basic to me—yes, those workers should be paid for that time since those check-outs are an inherent part of their workday!

There are many such excavations from Fink’s very smart poems, but I certainly should note for the record that one of these poems’ strengths, too, is their musical quality.  Musically, this example below is a rather obvious example—i.e., the music in many other poems are more subtle than this—but I offer this example—the first three lines to “HAY(NA)KU EXFOLIATION 2”—because it makes me laugh:

The excerpt above explains its form partly through how the hay(na)ku haynakupoetry.blogspot.com revolves around a tercet whose first line is one word, second line is two words and third line is three words.

Last but not least, the book also offers a wonderful—and wonderfully loving—“Intermission” of a conversation between the poet and his two daughters, Ariana and Maya, about poetry and art.  What a feast!  Here’s an excerpt from prose that would serve well the use of this book as a textbook (attention, ye teachers out there!):

Thomas Fink: If “baroque style … is the purest of music,” could you please explain  how purity is determined, and how and why this particular music should be judged purer than others?

Ariana Fink: It came before all of the new fangled music, and it basically provided a base for all of the other music out there.  There is less vibrato. The bow is made lightly; it is curved outward instead of inward. Today’s instruments are made to produce large sounds to fill a concert hall, whereas in the baroque era, instruments were created to make music, not sound. It was called “chamber music” back then, because it was meant to be played for the pleasure of the musicians, as well as for their smaller audiences. Today, however, we pack as many people as possible into large concert halls to listen to ehse modern machines we call instruments.

Maya Fink: What is your favorite outcome of writing and publishing poetry?

Thomas Fink: Though I don’t need to add to the sloppiness of idealizing “mystery” or “inspiration” in poetic process, I admit that it can be intensely pleasurable—after the experience of sentences, clauses, phrases, words changing into and stumbling away from each other with pathetic reverb—when it seems that wasteful, listless combinations finally get out of the

way
as though
to allow useful
verbal alliances and
clashes
to progress,

so the writer submits to personification: a page or more of working language suddenly commanding ear and eye to free it from further change, leave it to you. Another favorite outcome: A reader articulates what I didn’t know I made, helps me see—perhaps to turn out more or to segue to new borders.


clarity and other poems is a feast for the eyes, ears, brain, heart…and even the restless hand that seeks to make, to work.  It’s a result that wouldn’t have been so possible if the poet himself hadn’t attained lucidity within his vision and visions.  I strongly recommend that readers investigate the book directly—there is much to excavate, much treasure to discover, in these thoughtfully-made poems.