Erica Baum photographs pages she has dog-eared so that the text of two previously facing corners now reads at right-angles on either side of the crease. As Kenneth Goldsmith suggests in his foreword, the text can be read as a single stanza or two separate stanzas of decreasing line length. While the latter approach approximates Oulipo haikuization, the former often provides the most interesting results, forcing, as it does, a juxtaposition of unrelated text, as opposed to slenderizing consecutive phrases. The turned page reveals the geometry of publishing itself: whether precisely or imperfectly aligned, it refers us back to the mechanical, rather than the authorial source of the text. In the tradition of concrete poetry, removed from its narrative responsibilities, this text becomes visual and thus material. In an interview with Mousse Magazine, Baum describes her process: “I’m reauthoring the text in this simple act of folding the paper, which creates a new view” (www.moussemagazine.it, #22). Foremost a visual artist, Baum does not so much reauthor as revise these pages: making us “look again” at language and the structure of the book itself. While the texts are engrossing because of their multiple reading paths (the book feels longer than its 24 plates since each page invites several readings), not every poem is successful (a hallmark of conceptual and procedural poetry). Dog Ear’s real achievement is the way it confronts readers with our habits of looking at and understanding text. Amid the proliferation of digital reading platforms, these images make readers aware of those elements of the book we tend to gloss over: the blue edge and yellowed paper that mark Plate III, Mad, as from a vintage novel (perhaps a Dell paperback mystery) and the centered heading in all caps (partially cut off) that marks the source of XVI, Differently, as a play. Such clues remind us how much information typeface, layout, and paper encode, and how sight enables us to absorb them. By cropping her images into perfectly bisected squares, Baum alerts readers to the fundamental act of truncation at the center of her work: folding severs words, joins fragments, and challenges understanding. The dog-ear, after all, takes the ear as its metaphor, and what is seen here can be mis-heard, as in Plate VIII, How Long [/ here indicates the crease, while | indicates line endings]: 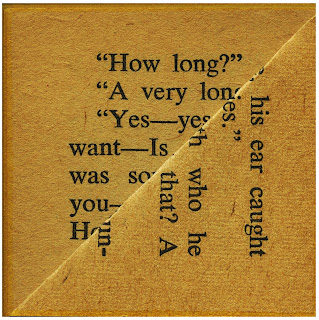 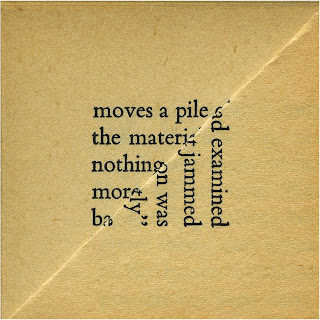