THE ROMANCES AND OTHER POEMS by MICAH CAVALERI

I am reconsidering that phrase due to having read Micah Cavaleri's The Romances and other poems. The notion of "falling in" would BE, were it a drawing, like this, yes? 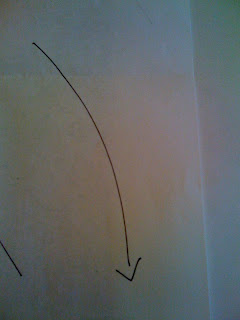 I understand the application of a fall because love's target would possess the gravity to attract and the lover would want to hasten contact and a fall is usually faster than a rise.  But falling in love -- especially in its early stages -- is usually (or many times) an ascension rather than a descent.  The highs of the experience.   So wouldn't the drawing be more like this: 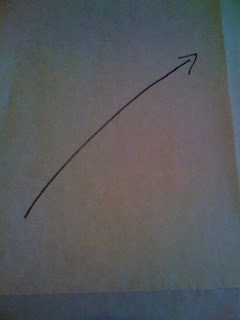 I am drawing these arcs because so much of Cavaleri's poems in this slim but powerful book feature what blurber Will Alexander aptly calls a "quickening" towards, well, romance.  Romance, among other things, but definitely romance.  So, were I to draw how the romance unfolds in (many of) these poems, it'd look like 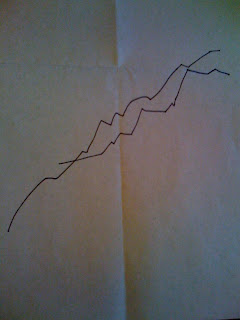 Through repetition, parentheticals and other devices, Cavaleri writes out an energy of unfolding attraction, but an unfolding that stutters towards.  It moves towards, but stutters in doing so. It stutters because falling in love is rarely a smooth, direct path like the arc portrayed in the first drawing above. For instance:

if I a greenhouse in my heart had built

Or this example which displays another strength of the collection: poems that provide metaphorical spaces for the reader to fill in with the reader's imagination of how exactly the narrative might unfold:

winter still here not a crocus

white shoes in a field a friend
a fire in a forest, then
song, then

Come winter, a flower or a vegetable garden
will give in to you.


The groping-towards (stuttering) and space-to-be-filled elements combine to create a marvelous poem like  "(a fairytale of" The Girl Called Ananalethein Legein."  I won't share the entire poem, but here are its first and last two stanzas:

She takes a hand of sand. She walks back home.
The pleasant girl in wool. And in pheasant. And in
gold. The biting ants sting natural. Is the girl.
Pleasant dressed in wool.


Until these pleasurable poems, I'd not considered how stuttering -- like a line break, caesura, or just plain period -- can effect a pause, the kind of pause that makes the reader tighten its focus on what the poem is sharing. Now, not all the poems stutter (if you will).  Some are just compelling lines and the words alone are enough to narrow the reader's focus and cause a consideration -- for the attentive reader, such consideration might result in what Alexander calls a "bold new orientation."  For instance,


This reminds me of the forbearance against killing even the tiniest bug, and all that such forbearance signifies about attempting to avoid killing or doing harm.  Why would such a love be an "ethic"?  Well, for me, it has to be an ethic because this forbearance is too easy to breach otherwise, if only with lack of attention.  An ethic (among other things) causes the ethic-holder to pay attention.

O my god, if you will uncut my
gut and hide my scar and make
me out of empty parts.


Yes, as the above shows, quickening occurs in some of these poems from a religious fervor. It's a welcome element as they add to the uniqueness of Cavaleri's poems.  Here's one:

a piece of holy wood

a piece of holy wood, an aromatic (a romantic) piece of
wood. a grotesque piece of wood
is a wet offering
of my lost heart, my lost heart


As many writers know, good writing often causes another writer to write in response--as a writer, I get affected in this manner.  But when a poem(s) inspires me to draw (frail though such drawings are), then I feel such poems are especially special.  To understate the matter, with The Romances, Cavaleri has written some especially special poems.