Okay. Here we go: another publication from those very clever peeps at if p then q.  They release smart, often witty publications in their "aim...to be consistent and cutting edge."  What I appreciate about if p then q, which also releases poetry that "brushes shoulders with contemporary art," is their openness to how their poetry may be read.  Their vision is inviting, and the poetry they publish is usually inviting (many (would-be) cutting-edge sorts aren't that inviting, you know) -- thus this revoo of  ITEMS by Tom Jenks.

The number of "items" in this book equals 1,000.  As I read/perused my way through it, I easily imagined how the poet-artist could have created them in some notebook -- like a notebook of jottings.  Many of the individual items give pleasure, many are aphoristic, many are hilarious -- in sum, though, they have an effect larger than the number of items.  Together, they bespeak a beautiful mind -- an edgy, restless but one senses also kinda down-to-earth mentality.  It's the mind of someone I'd love to spend an afternoon with at the neighborhood bar.

Entonces, on to some examples!

108: It is evident from his work that he lost broadband connection

That's just heee-larious.  Also the kind of thing you read and you feel -- with absolutely no reason -- suddenly smarter than you really are as if you got a joke that no one else is getting.  We don't know what kind of work is being referenced, but there's a whiff of the zeitgeist that makes it logical somehow.  For instance, sometimes I have to pause in the writing of a poem because I lost the internet connection and there went my approach of Google-sculpting a poem.  (Or, surely John Bloomberg-Rissman's opus-in-progress Zeitgeist Spam would look markedly different if "he lost broadband connection.")

But, one could delve deeper into the poem. Maybe "he" kept producing his work even when he lost broadband connection. So what would such a work look like?  It could be ignorant (because, we all know, if it's not on the internet then it's not real ... or true?).  But the work could also be of a deep Truth with a capital "T" because it didn't rely on the internet and most things on the internet are not true?  And so on: hello Alice!

More examples, you say?  Okay, here's two (you can click on image to enlarge): 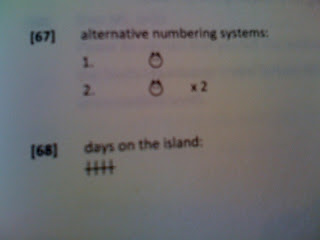 And [68] is deceptively deep.  Deep minimalism.  Because one would have expected that slash to be slanted from left to right against the vertical marks (that's how I was raised to count by using those marks and so I assume that a slant is the convention?).  But by making the horizontal mark straight across the vertical lines, there's a sense that those vertical lines are being deleted or erased.  So when I look at the resulting image, it's not quite clear to me whether it's supposed to represent five or four.  That is, that one has counted five days on an island or has lost four days on an island (especially if, with the latter, one is stranded on an island).  Or maybe it's a combination--it does signify five days but it's five significant lost days.  And so I go on and on in thinking about [68], as I am sharing in this paragraph, until I am halted short by the realization--What the eff am I going on and on about?  Is there some big point to my thoughtful and thoughtless meandering?  I just effin' lost four or five minutes in my life going on about [68], which is to say, I just wasted four or five minutes in my life!

Not that I'm bitter, of course.

You don't care about my bitterness.  You just want another example?  Okay, here's another one: 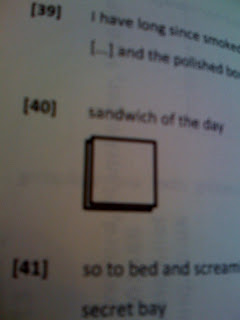 "Sandwich of the day."  You get it and it's amusing.  But it's more than that.  Because the doubled image is a perfect square/rectangle (I refused to waste more time measuring it) instead of in the shape of a sliced loaf of bread.  Well, that  square/rectangle can symbolize ... a page!  A blank page.  Which is to say, one has yet to write the definition of "day" or one has yet to see how the day unfolds.  The significance?  Don't know.

You want another example?  Wassa matter?  Don't you have a life?  Okay.  Here's one more example: 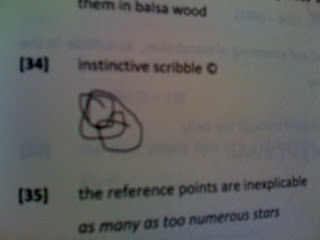 Now, [34] is presented as "instinctive scribble."  It's muy inteligente, what with that copyright symbol right next to it.  That's actually the wonderful thing about the copyright -- it's quite democratic!  You could copyright something rivaling the works of Shakespeare as much as plain drivel (such, after all, is the wonderful expanse of poetry!).

But when I look at [34], I focus more on the presented scribble....and have to say I have problems with the adjective "instinctive" being ascribed to it. I dispute it!  Because I think of an instinctive scribble as a scribble that would have taken less effort than this presented drawing, what with its loops and all.  An instinctive scribble should be as effortless as a check mark, shouldn't it?  Doesn't an image like this end up taking more thought and thus less instinct?

Am I right or am I right?

The right answer to that question is, It doesn't matter!

Here's the thing -- the more I go on and on writing this review, the more I feel like I'm just wasting my time.

But here's the upshot of my review:  HIGHLY RECOMMENDED because I don't begrudge this wasting of my time!  It's just too ... pleasurable!  Like wasting time with the breeze on the hammock, hands behind one's head, watching the world go by ... ... and occasionally reaching forth for the nearby small notebook to jot down some thought or observation…